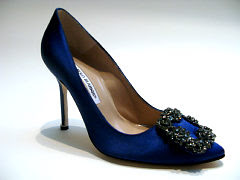 I'm in love! These shoes are custom-made by Blahnik for the Sex in the City film. My girlfriends and I went last night and we laughed and cried together. These shoes are involved in a glass-slipper style plot twist in the film. Yes, it brought back great memories, it's all about friendship, love and forgiveness! Carrie finishes up the series with these final words: “The most exciting, challenging and significant relationship of all is the one you have with yourself. And if you find someone to love the you you love, well, that's just fabulous."

Facts about the movie:

Restaurants used in the film include Chelsea’s Buddakan and 202 Restaurant, The Bemelmans Bar at the Carlyle Hotel, Lumi on the Upper East Side, Junior’s in Brooklyn, Raoul’s in Soho, the House near Gramercy Park, Starbucks at Astor Place, Good World Café in Chinatown, and The Modern.

In other news, I finally got my 3D cupcake pan. I'm planning to make it next weekend.

Posted by Casa Mia
Email ThisBlogThis!Share to TwitterShare to FacebookShare to Pinterest

3D cupcake pan?!!! Cool! And love those parting words. I try to convey that to my daughter every single day. Love yourself...

oh, i still have not seen the movie! I must go! love the shoes.